Oxygen – both medicine and poison

There is no human or animal life without oxygen. Oxygen is produced by plants through photosynthesis. In this process, plants capture energy from sunlight and take carbon dioxide and water to produce important nutrients – oxygen is a by-product, which is released back into the air.

Most organisms, including humans and plants, as well as many bacteria need oxygen in order to gain energy by oxidation. The oxygen is reduced to water in the respiratory chain. In addition, many metabolites are degraded by oxygenation via certain enzymes (oxygenases). In plants, oxygen is utilised for respiration when it reaches the roots.

Oxygen is a colourless, odour- and tasteless gas with a density of p = 1.429 g/l under normal conditions. The boiling point lies at -183 °C, the thermal conductivity is 26.4 mW/mK. About 21% of our atmospheric gas is oxygen – accordingly, the partial pressure in normal air is 0.21 bar.

Oxygen used in human medicine is subject to strict controls and regulations. Medical oxygen is either delivered in white, especially marked bottles (in Germany) or supplied as liquid oxygen in tanks. In Germany, oxygen is a finished medicinal product as defined by the German Medical Products Act (MPG). Under certain medical conditions, the oxygen content in the atmosphere may not be sufficient for a certain physical situation (e.g. after surgery, in case of lung disease or for newborns) or to initiate certain healing processes (e.g. for diabetic problem wounds or bone infarcts). 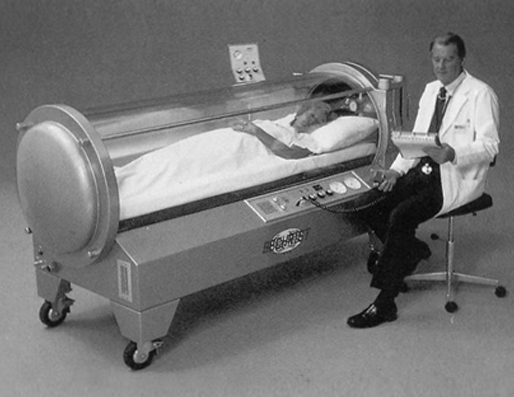 Breathing hyperbaric oxygen, the oxygen partial pressure in the blood and tissue increases according to the pressure inside the chamber. 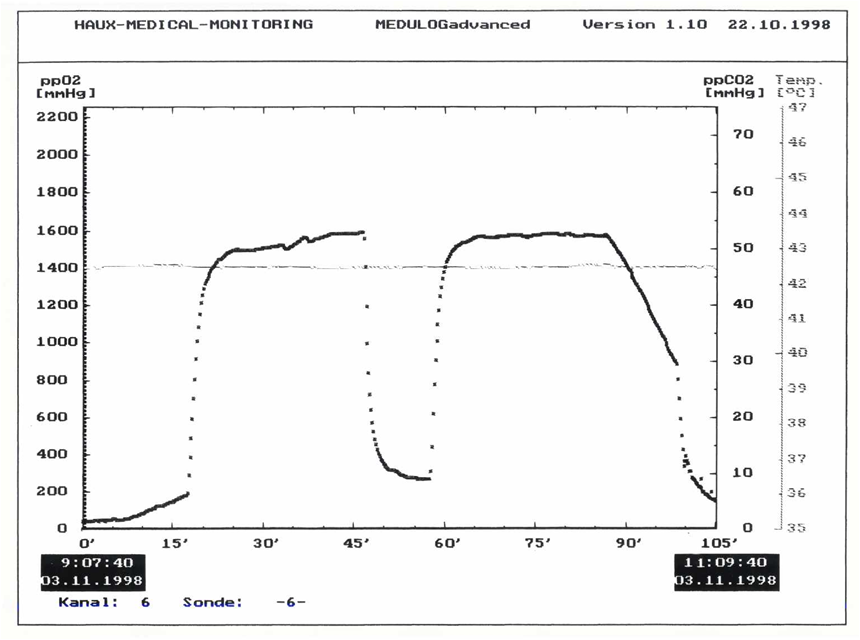 Thus, immediate oxygenation is achieved in ischemic body tissue and healing processes such as an anti-edema effect with reduction of swelling, angiogenesis (formation of new blood vessels) or the dying-off of anaerobes (strictly in absence of oxygen growing germs) are triggered. In case of a diving accident, an HBO is the only causal therapy. Next to the above-mentioned effects, the nitrogen bubbles responsible for a DCS are first resolved through recompression and then desaturated in a controlled manner during the following decompression. Additionally, as per law of mass action, nitrogen is increasingly expelled.

Oxygen toxicity: what is a blessing within narrow limits can quickly become a curse above or below these limits. Below a partial pressure of 0.16 bar of oxygen, a person usually faints. If the oxygen partial pressure is too high, there is a risk of acute poisoning. At an ambient pressure above 1.6 bar, one is at risk for a so-called "oxidosis" (acute oxygen toxicity, oxygen convulsions).
Depending on the level of the partial pressure and the duration of oxygen exposure, two types of mechanisms can be distinguished:

Acute oxygen intoxication: at a partial pressure of 1.6 bar or more – e.g. while using oxygen-enriched air (nitrox), during a technical dive or during HBO – acute poisoning of the central nervous system can occur. This so-called Paul Bert effect (or neurotoxic effect) occurs when breathing high oxygen concentrations (Paul Bert, a French physiologist, 1833-1886).

The higher the total oxygen dosage, which is calculated from the product of partial pressure and time, the higher the probability of a CNS poisoning. The critical limit could be exceeded when diving with oxygen enriched gas mixes, which then causes the acute oxygen toxicity. Oxygen convulsions have also been reported in recreational diving with compressed air at greater depths (starting at 60 meters) – depths at which a recreational diver diving with compressed air should not be found.

Symptoms of acute oxygen toxicity can be restlessness, a metallic taste on the tongue, uncontrolled twitching of the facial muscles, tunnel vision, dizziness, nausea and generalised convulsions. At high oxygen partial pressures, these symptoms can already appear after a few minutes. The early signs of an upcoming acute intoxication are way too short to react adequately – especially under water. With a few exceptions (divers with full face mask), an oxygen convulsion leads to drowning. Even if the dive buddy helps quickly, the spasm cannot be controlled under water nor will one win the race up to the surface. During a seizure, the glottis is closed tightly so that no air can escape from the lungs. Such a rapid ascent will consequently lead to a hyperinflation or a rupture of the lungs and of course the expected decompression sickness. All this would admittedly be preferable to drowning, but still, you do not win this race to the surface.

Observations in patients in hyperbaric chambers demonstrate that the affected person often strips off the mask out of a reflex before the seizure starts. At this point, the patient is already not lucid any more. Even if the oxygen supply is reduced to a normal level at that very moment, the spasm will not be affected and will take its natural course in full length. Divers suffering a seizure can be observed taking their regulators out of the mouth or removing their mask from the face. Attempts to put the regulator back in the mouth will fail, because the teeth are clenched firmly and the jaw cannot be opened.

Chronic oxygen intoxication: longer exposure times of breathing high dosages of oxygen (>24 h) – even at low partial pressures (<1 bar) – can cause considerable harm. The target organs are mostly the lungs. The higher the oxygen partial pressure the less time of exposure is needed to cause the same damage. From the 1950s and 60s we know that prolonged oxygen supplementation for premature infants in incubators can cause an impairment to the retina, which in that time led to irreversible blindness (retrolental fibrosis). The lung damage is also referred to as the "Lorrain Smith effect". The effect is named after the British physician James Lorrain Smith (1862-1931). Fig. 7 The mechanism behind this consists of formation of oedema (fluid accumulation) in the small air sacs (alveolar oedema) and damage of the surfactant factor resulting in alveolar collapse. This leads to a reduction of the gas exchange surface. The symptoms of pulmonary oxygen toxicity usually start with a sore throat and an occasional dry cough, but could enhance into an uncontrollable, painful cough, tightness of the chest, dizziness, weakness, dyspnea and pain while breathing. The lung tissue becomes more and more damaged. In the beginning, the structural changes are still reversible, but will become permanent and incurable after longer exposure times leading to an insufficient oxygen supply and even death.

When diving with compressed air, with a depth limited to 40 m, the partial pressure is max. 5 bar x 0.21 = 1.05 bar. This oxygen partial pressure would require an exposition time of about 8 hours to cause a lung damage. Since decompression calculation hardly allows a dive at 40 m for longer than an hour, chronic oxygen toxicity of the lungs can be excluded from recreational diving.

Recompression treatments of serious diving accidents (DCS II) where high oxygen dosages are therapeutically implemented (e.g. US Navy Table 6 or 6a) are different. With this treatment, there may be toxic effects on the nervous system and even of chronic oxygen toxicity can occur, particularly when the diver is physically exhausted or repetitive recompression and HBOT sessions are necessary. In order to calculate the risk for damage by oxygen administration, the so-called UPTD (Unit Pulmonary Toxic Dose) has been introduced in diving and hyperbaric medicine. 1 UPTD equals 1 bar ambient pressure with 100% oxygen for 1 minute. Animal testing has shown that the lung function can already be restricted at 615 UPTDs. This needs to be considered in the therapy protocol.

The biological oxygen compatibility and oxygen sensitivity vary individually – what one person can handle may be too much for another. However, the oxygen tolerance doesn't only vary between individuals but may also vary for one person from day to day depending on their physical condition and day form. Thus, the compatibility and tolerance at rest is significantly higher than with physical exercise, which is why one can apply higher dosages in a deco chamber than in the water while diving. Lack of sleep, dehydration, alcohol influence and excitement increase the sensitivity. 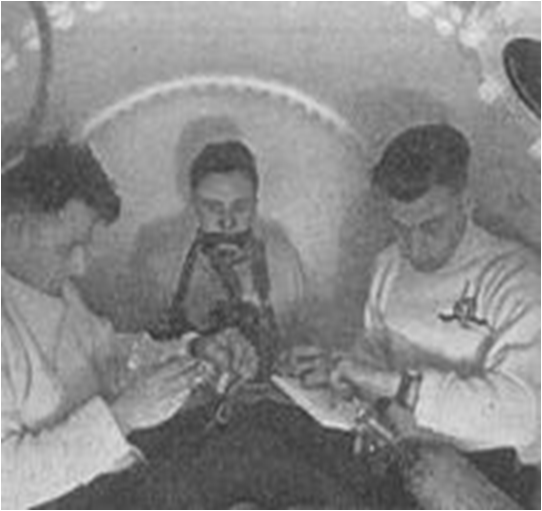 Oxygen tolerance test: oxygen tolerance tests are still performed until today to detect the particular sensitivity to oxygen and individual tolerance level. The candidate breathes 100% oxygen in a deco chamber with a partial pressure of 2.8 bar. The trial is stopped immediately once the first symptoms occur. However, the predictive value of these tests is more than questionable and should certainly not be taken as a guarantee for a given depth. What is easily tolerated one day can be a completely different story the next. 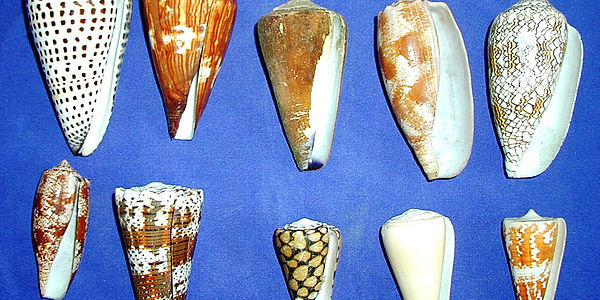 Due to the colourful and interesting texture of their shells, cone snails are often a collector's item during a vacation near the ocean. ... read more 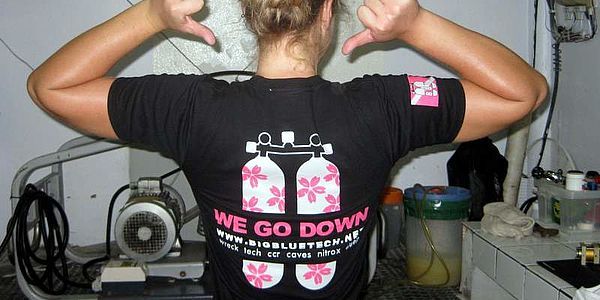 In principle, every diving medical examination follows the same basic rules. However, every "special group of divers" has their own needs and medical questions ... read more