For us divers, the lung is of course one of the most important organs. A diver's lung should therefore be thoroughly examined during a fitness to dive examination, which generally includes taking a detailed medical history, doing a detailed physical examination and a lung function test. If anything conspicuous appears during these tests, further testing or examinations are necessary. Diagnostic imaging such as x-ray or a CT scan can clarify the situation. Since there is exposure to radiation during these examinations, they should only be done if a pulmonary disease is suspected.

What is a COPD?

The abbreviation COPD is short for chronic obstructive pulmonary disease. It affects about 14 percent of the world's population. Typical symptoms are respiratory complaints, frequent coughing, sputum and tiredness or loss of stamina.

COPD has four stages. While stages I and II can be treated and are reversible, from stage III onward, the change in the lungs is so extensive that a full regeneration of the lungs cannot be expected, which is why patients are usually not fit to dive at that stage.

What causes COPD or a lung emphysema?

There are many reasons why someone gets COPD or a bullous emphysema. Most of the time, it occurs due to long-term exposure to irritants such as tobacco smoke, silicates, fine or quartz dust.

Living next to a coal-fired power plant without a filter while growing up can also contribute to the development of this disease. Smoking, however, remains the greatest risk factor: Up to 90 percent of the time, consuming tobacco is the cause for COPD and approximately every second smoker at an advanced age gets chronic obstructive lung disease. The risk increases with the amount of tobacco consumed; second-hand smokers are also at a higher risk for developing the disease. In addition, COPD can also develop in the course of a long-term asthmatic illness or a virus infection. A more rare genetic cause is alpha-1-antitrypsin deficiency.

The mentioned various harmful substances as well as the deficiency of alpha-1-antitrypsin trigger an inflammatory reaction of the lung tissue in the further course of the disease, thus stimulating an accumulation of white blood cells which release even more enzymes. The thin walls of the alveoli weaken and eventually rupture. When those "dissolved alveoli" merge, they form a bigger cavity. Medically this is called an emphysematous bullae. Those structures can exert pressure on the bronchioles (small bronchi), which consequently collapse during exhalation. Thus, the airway is blocked like by a one-way-valve and the air gets trapped inside the alveoli. 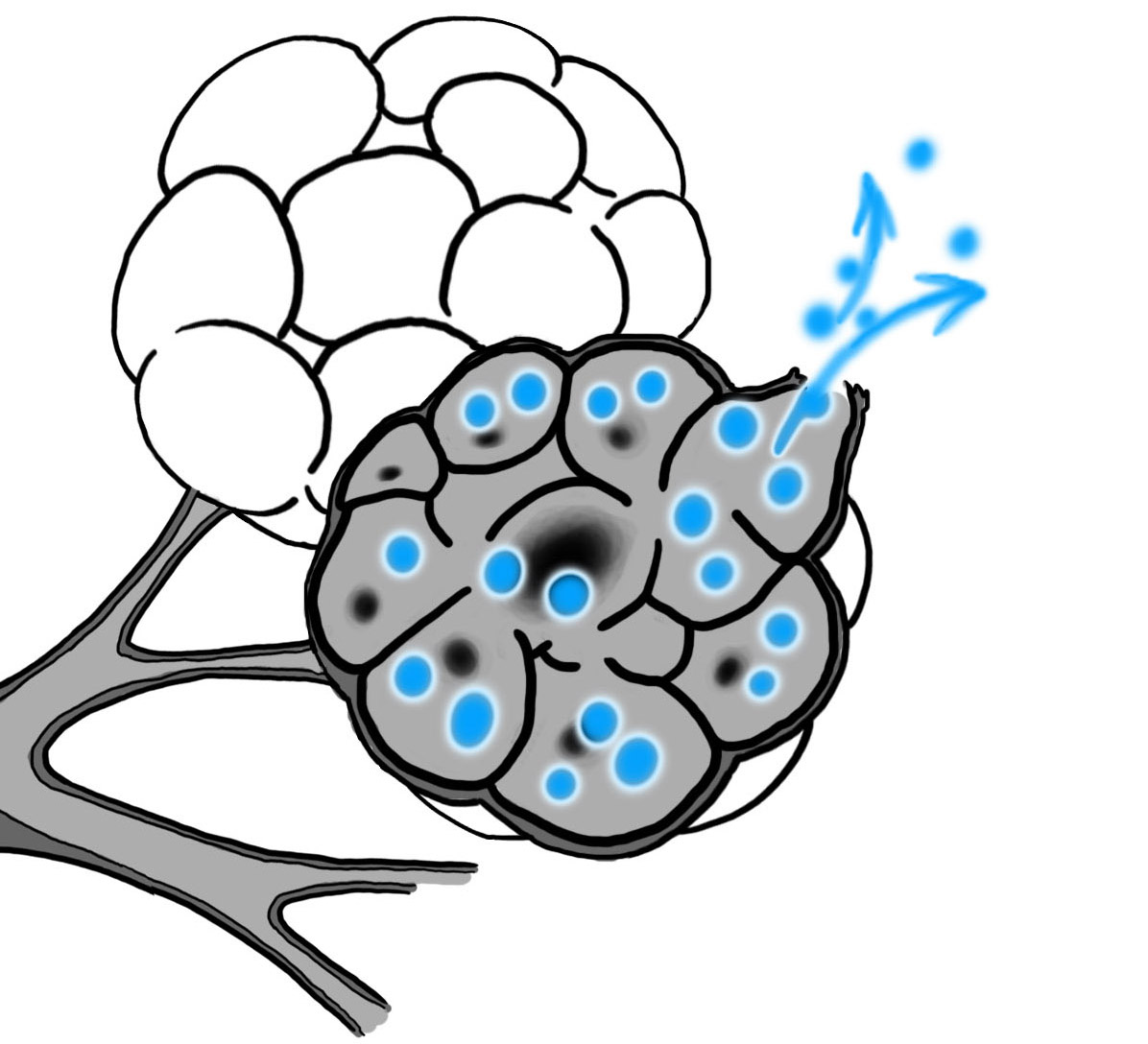 The next time air is inhaled, the alveoli and bronchioles may become distended due to the trapped air. This overexpansion causes the alveoli to be destroyed and large emphysema cavities, which are unsuitable for gas exchange, to form. In extreme cases, previously functional alveoli turn into large, functionless "emphysema cavities", which are referred to as bullous emphysema.

In addition, oxygen radicals deactivate the alpha-1-antitrypsin, which normally disables harmful enzymes. These enzymes gradually harm the lung tissue, causing a loss of blood vessels and thus a disrupted gas exchange. Finally, the lungs lose elasticity and the air cannot escape completely, which causes a chronic hyperinflation of the lungs. In case of a COPD, the larger bronchi are also permanently constricted.

Emphysema cavities mostly develop in the upper part of the lungs. Clinically speaking, a bullous lung emphysema is inapparent. Some people notice exertional dyspnea as the first symptom (they do not get enough air when they exercise or climb the stairs), a spontaneous pneumothorax (ruptured lung) can also result from this disease.

A lung emphysema usually develops as a result of the COPD and can also be seen as a special form of an advanced COPD. The first sign of a COPD often is a common chronic bronchitis with coughing and sputum. The affected person usually does not feel physically impaired, because the bronchi are not yet constricted. At this stage, the disease is still reversible, if the toxic substances causing it are strictly avoided. If the bronchi are narrowed in the course of the disease, then the changes are often irreversible. 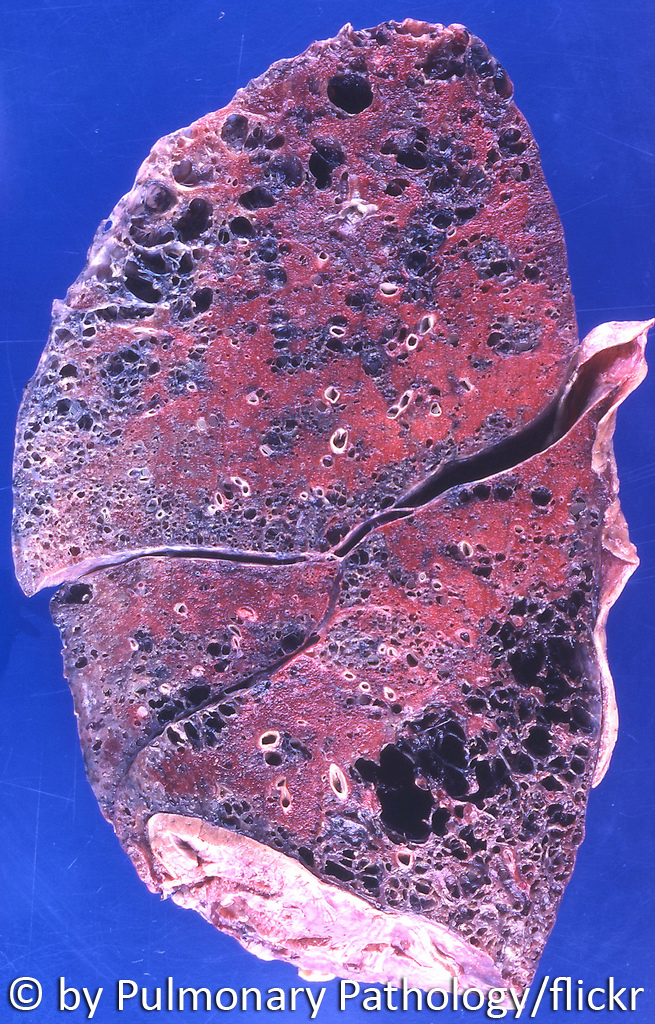